Engaging with the international diaspora implies also helping the diaspora to better know the people that they left behind in their home country. It also implies assisting those in the country of residence of the diaspora to value, celebrate and cherish the good achievements of their peers who are succeeding. When it comes to the contemporary African intellectuals, scientists, leaders, developers, managers, reformers, and educators, one name has been locally and internationally leading the list: Prof Brice Augustin Sinsin.

Best Manager of the Year in Science and Education Award in 2013 from the International Socrates Committee in Europe.

Brice Augustin Sinsin was born in 1959, a year before the independence of his native country, Benin Republic (West Africa). Despite the challenges surrounding his childhood, Brice Sinsin worked very hard until he earned a Ph.D. with distinction in Agronomy at the Free University of Brussels (Belgium) in 1993. Having overcome every challenge on his way, Prof Brice Sinsin is today internationally applauded not only for his scientific achievements, but also for his management and leadership ability that has been best known after he became the Rector/Chancellor of the University of Abomey Calavi (UAC), the biggest university (consisting of more than 100,000 students) of Benin. During his tenure at the head of UAC, Prof Sinsin won several awards including the “Best Manager of the Year in Science and Education” in 2013 from the International Socrates Committee in Europe. In less than 4 years, his undeniable leadership and reforms brought more than a dozen of international prizes and awards to UAC. 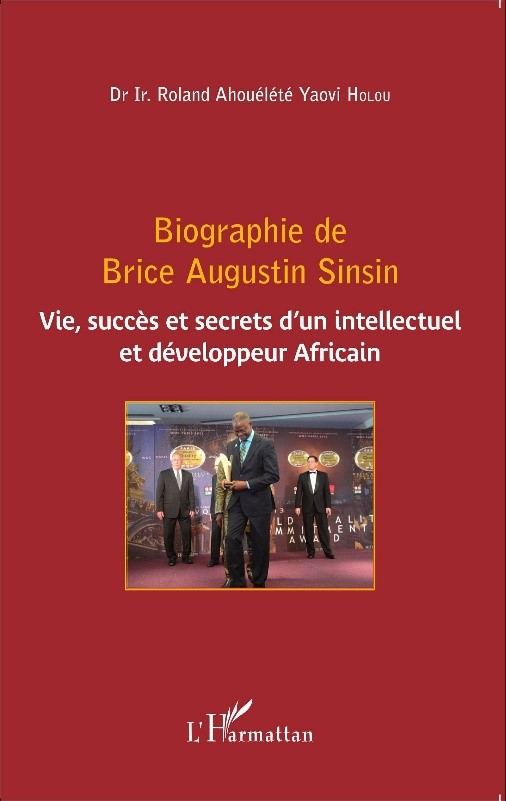 A few days ago, the Biography of Prof Brice Sinsin was published. The 18 chapters of that book revealed the true facets and secrets of his masterful journey. Indeed, Brice Sinsin is a Beninese, a beloved father, a tireless leader, a rigorous developer, a generous educator, an undeniable reformer, and a proven scientist that has braved everything in his life, from childhood to the top of modern science where the sweat of his brow raised him to an internationally acclaimed reputation. Forerunner of a new approach to science policy for the emergence and development of nations, Prof Brice Sinsin is a model that all generations are invited to imitate and seek to surpass. His biography explains how this Beninese works on the basis of principles and passions that hide the code of his success that many seek to emulate without wanting to pay the price. In the 300 page biography, Prof Sinsin also proposes strategies to reform the African democracy and constitutions to suit the needs of the African people, learn from traditional leadership systems in Africa, make African countries more national and patriotic, reform politics in Africa and better train the African diplomats. The author ended the biography with a critical conclusion and a fervent prayer. To learn more about this biography, please visit www.BriceSinsin.com. To get your copy of the biography, please click here:

This biography was written by Dr Roland Holou (www.RolandHolou.com), a scientist, a businessman, a published author, and an international consultant. He obtained his Bachelor Degree in Agronomy and his Master of Science Degree in Agricultural Engineering at the University of Abomey Calavi in Benin. He has a Ph.D. in Plant, Insect and Microbial Sciences at the University of Missouri (USA) where he graduated as the Doctoral Marshal (first of his class). Roland Holou is the Founder and CEO of DiasporaEngager (www.DiasporaEngager.com), the premier global diaspora engagement network platform that connects the international diasporas to each other and to opportunities anywhere.